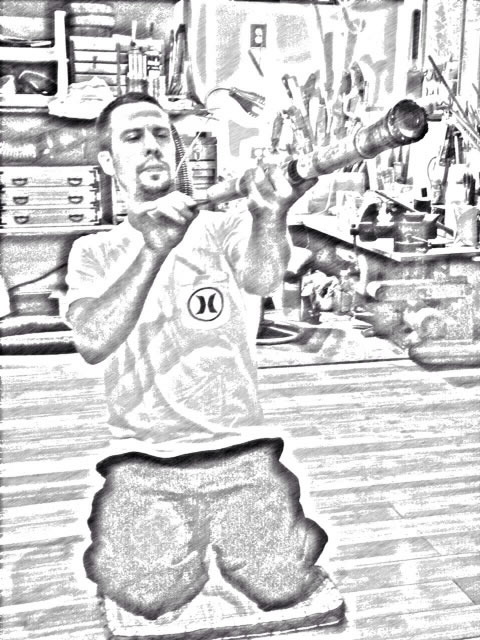 Shawn began to study the art of playing Shakuhachi in 2003. His love for playing, and for this art form drove him to immerse himself in learning the craftsmanship needed to make Shakuhachi. Shawn followed his passion for Shakuhachi by rigorously studying and learning to master the art of Shakuahichi making. Shawn has studied with Shakuhachi sensei’s such as Bill Shozan Schultz, Riley Riley, Kazushi Matama, and his main sensei Kaoru Kakizaki. Shawn has completed most of studies here in Los Angeles, CA and has also traveled to Japan many times throughout the years to further develop his craftsmanship and Shakuhachi making techniques and skills. Shawn has developed strong partnerships and mentorships with sensei’s Takahashi Toyomi, sensei John Kozen Neptune, Monty Levinson, Tom Deaver, and Shingo Kimura. When making Shakuhachi, Shawn’s goals and directive is to craft Shakuhachi as it would be made traditionally in Japan, and to always maintain the integrity of the best practices and historical techniques used when making Shakuhachi. Shawn has been able to accomplish this through his training in Los Angeles, as well as the many lessons he’s had in Japan, and the time he’s spent working with top makers while in Japan. Traditionally, the old-style of traditional Japanese made Shakuhachi has been a well kept secret within a makers lineage, however Shawn has been very fortunate to have people willing to teach him and share their techniques and information with him. This has enabled Shawn to make very high-quality professional level jiari Shakuhachi.